Hello my lovely virtual goddesses and gods! Whew lemme tell ya it isn’t easy going through all the fabulous items bought during the annual Fantasy Faire, mixing and matching, finding the perfect skin and hair and eyes to go with the outfit…but this goddess is determined, doggone it! So here I finally am, a few weeks later and many fabulous outfits richer, and ready to show them off, woohoo! As always, click on any pic to see it in glorious larger size in my Flickr stream!

I bought so much stuff from the Jinx store that was located on the Fantasy Faire’s Breeze sim that it gets its very own section! It’s not my fault – everything was on sale for 50% off at the Faire! So let’s get to it shall we…what did Pretty buy from Jinx?

First up we have the frolicking faery in the pic featured up at the top of this post and on Flickr here. She is wearing the oh so cutielicious Victoria collar, corset and short short skirt in the Shabby Chic pattern, which is all soft and feminine, a cream base with pastel pink and green florals. The Victoria set comes in various colors and patterns so if creamy isn’t your thing, just check out the related items on the Marketplace. I love this outfit for another reason, it made me dig out a pale skin to match the outfit, and lo and behold, I really liked the look! I’ve always been partial to dark skin and hair, and have never really felt it when I tried blond and pale in-world, so finding a pale look that I love is an extra “expand my horizons” bonus!

The next pretty frilly is Casey, a dress in Jinx’s magical, glowy “Glass Range” line of clothing. I felt so feminine and Pretty in this lacey, sheer dress that comes with two underwear options that will ensure even the conservative human sims will let you in to wander around and make the sim look prettier. I liked the Glass Range so much I also bought the Avery dress, which I haven’t even unpacked yet – but that’s what happens when you go on a frenzied spending spree! Did I mention everything was half off in this store? Btw, those cutie patootie ram horns with the pink flowers are also from Jinx, but they were one of the vast trove of slave chest prizes scored from the Fantasy Faire’s Bard Queen Quest. There’s a close up pic of them near the end of this post.

The next Jinx look is all sexy innocence and a bit of Asian flair with the Theanella dress, adorned in bows and accompanied by a glorious headdress. The vibrant blue and purple colors and fan and chopsticks headress make it easy to see why this color combo is named Peacock. Sorry folks, I didn’t find this on the Marketplace, so try the main store. I think it was being sold only at a couple of shopping events but such items often make it to the store later.

Last in the Jinx or bust lineup is the deliciously dark Shibaria dress, Night shade which is of course black. This tempting little black netted tunic ensemble also comes with bra, panties and arm bands, none of which I am wearing in this photo, lol. I am, however, wearing the Mircella Chains belt and top by Luas underneath the Shibaria tunic, AND I’m sporting the gorgeous, Gold Draco skin from Fallen Gods, all bought at the Fantasy Faire. The handsome sun god Sam Puren is also wearing one of the skins from the Fallen Gods Gold line, which he purchased at the Faire.

The Jinx is Up, but Lots More is in Store!

Those sexy Mircella Chains in the photo above aren’t all I got from the Luas store, because GACHA. Yep, you know I’m a gachaholic, and this beautiful princess dress called Margeary (ok I guess that really should be Queen’s dress) was just too pretty to pass up. I don’t remember the pull price but it must have been pretty fantastic, because I have it in Cream, Purple and Black. Finally dear Holly took pity on me and gave me the pretty Pink one she got, which is the one I love to wear! I got her favorite, blue, and so we traded. Thank you Holly!

The awesome Egyptian goddess outfit shown below is called Babylonian Wings and was bought for an incredibly low price at the Bare Rose store on the Golden Delta sim. The outfit includes the res, top, necklace, wings, forehead chain, and arm and wristbands! Not shown in this post but equally awesome is the black Bastet outfit also bought from there, which includes really cool cat hands and legs.

Belle Epoque in Breeze featured a fairy dress I just fell in love with! The next dress, called Rahel, came in several color variations, but I really liked the beige a lot, the color just blends right in with so many of my faery accessories. The Rahel set comes with the dress, plus wings and armbands that are not shown in this pic. Those horns in the first pic below are the darling Jinx horns again, which were a prize from the Bard Queen’s Quest, as was the handsome kilt outfit Sam is wearing in the 2nd pic below. The horns I’m wearing in the 2nd pic are by Plastik and a gift from last year’s Faire, but this year they sold some great HUDs that changed the colors on the candles and ribbons…Genius! I bought 3. These two photos below were snapped by the super wonderful Sam Puren, who always graciously allows me to use his pics in my posts – thanks Sam! ❤ 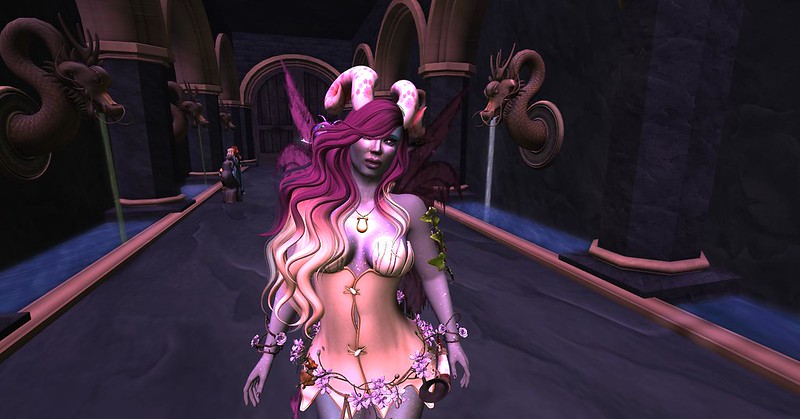 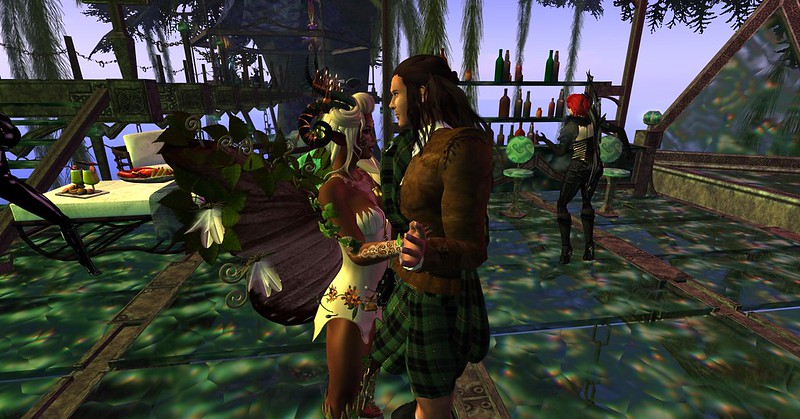 It wasn’t just all pretty dresses that were to be found, oh no, there were fantasy bits galore! In this next pic we see the awesome mesh Faun legs – long hair version from Gauze&Trap! These legs rock! They come with an HUD that provides multiple color options for fur, hooves and tattoos, several tattoo shapes, glow slider, and transparency slider. Woot! The pose I’m using here is Butterfly Lover from Rook Poses, which comes with 4 poses plus butterflies to go with each pose. Squeee! The horns are from a Cerridwen’s Cauldron gacha and they are touch to mod colors. They are beautiful! The gacha sports several different styles of horns, and they are all awesome.

One of my favorite finds was the Dryad Set – Healthy from Figment. These mesh legs and hands are just beautiful and bound to make any goddess feel closer to the Mother. Yah I know there’s a lot of bits and pieces from other outfits making this look complete but this post is really just to show off the stuff I got at Fantasy Faire, so that’s the info I’m giving.

Also found at the Faire but from AiShA was the Dryad Mask, which happily matches the Dryad legs and hands perfectly! (Note: that glorious leafy headdress is not part of the mask, the mask is just the mask around the eyes. That leafy headdress I got ages ago and was a freebie from an art installation that gave away a bunch of awesome avvies.)

Ok my lovelies, that’s it for this post and thank Goddess! I am so tired…I need to write shorter posts or start earlier in the day! But hey there were SO MANY great finds and bargains to be found at the Fantasy Faire, this post was bound to be a long one. May you all have sweet dreams and restful sleeps!