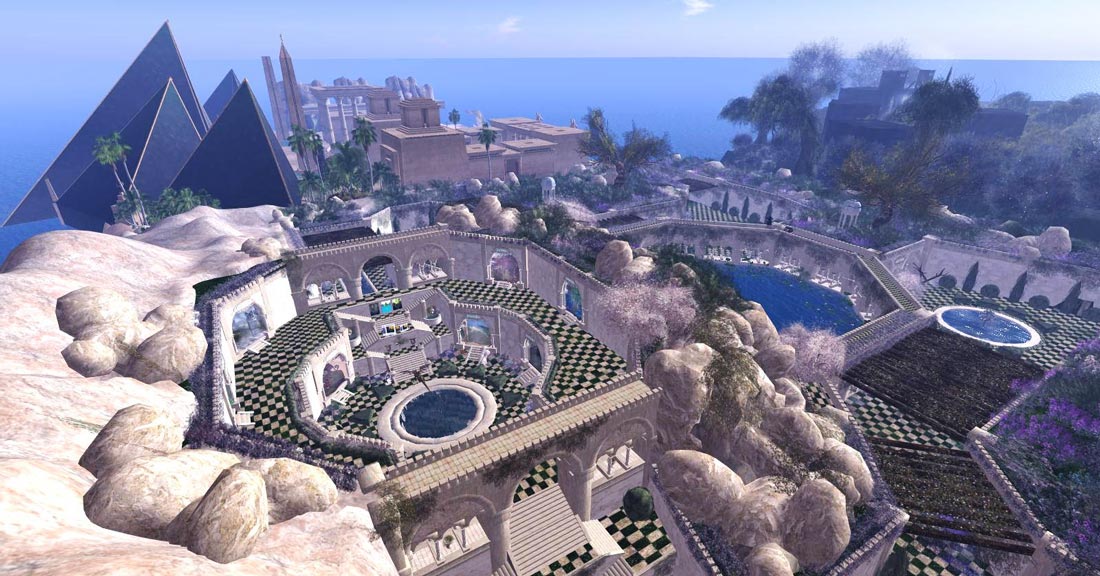 As always, the starting point was the Fairelands Junction, the landing point from which we found access to all the Faire sims, and also the place where we found the Bard Queen who got us started on the hunt quest. These two photos by the wonderful Sam Puren beautifully  capture designer Saiyge Lotus’s vision of geometric lines and patterns so expertly interspersed and melded with the organic forms of rocks, trees and plants:

The first sim I visited after exploring the Fairelands Junction and collecting the free low lag avatars found there was OtherWorld, designed by Elicio Ember. Otherworld showed off the magnificently magical, ethereal and yes, other-worldly flora, rocks, waterfalls and other landscaping materials that can be found and bought in Elicio’s store, Cerridwen’s Cauldron.

Next up on my journey through the Fairelands was the Golden Delta, designed by Alia Baroque. Alia’s sim is always highly anticipated and often one of the most crowded ones when the Faire opens, and it’s no wonder – Alia is the creative force behind the highly popular Fallen Gods store where fantasy lovers love to shop for gorgeous skins. I have several Fallen Gods skins in my own inventory, and plan to add many more. On a side note, when you visit Fallen Gods, be sure to wander the rest of the sim, called The Arcipelagus, as it is a beautiful build, and one of my favorite places to go to chill out or take photos. Fallen Gods group members can rezz briefly – very briefly, but long enough to hop on a pose ball to get that special photo. But back to the Golden Delta at the Fantasy Faire:

Now we’re going to change pace a little and check out the darker sims, Blackmoor, Echtra and Dangarnon.

Blackmoor, designed by Lokii Violet, was a hidden gem of a hamlet of cobblestone streets and warehouse-like buildings nestled in the midst of a fog laden forest. Gaslit streetlamps and sparkly faery lights kept us on the path as we wandered this sim. There were some wonderful photo opportunities for those who took the time to explore all that Blackmoor had to offer.

Next up, Echtra’s theme was Viking, and sim designer Loki Eliot did a great job of creating an atmosphere of mystery with a fog-shrouded Windlight setting and a long row of wooden shacks lining the plateau of a large oceanside cliff. Rumor has it that there was a giant dragon sleeping under that hill, and those who took the time to explore the sim and especially the great Ale House at the top of the hill were not disappointed.

Dangarnon seemed to me to be almost a blend of post apocalyptic meets the Prancing Pony meets Gondor. Designers Jaimy Hancroft and Eowyn Swords created a crowded ancient-future cityscape rife with dark corners and alleys where dodgy deals might be made with questionable inhabitants and visitors. This faery felt uncomfy in this sim, and sadly I saved it for the last to explore, and didn’t have time to do so before the Faire ended. I’m willing to bet that those who wandered found some things shimmery and shiny in unexpected places. If you did explore this sim, please do leave some links to your photos or blog posts in the comments, I’d love to hear about your adventures here!

Ok enough of the darkness, let’s get back into the light! Next up is Breeze, designed by Kayle Matzerath. Breeze was a fun sim, all pastels and candy colors and reminiscent of a hobbit shire in that the stores were all built into the sides of hills and everything just seemed cheery there due to the cotton candy lighting. I bought a LOT of stuff from the stores found here, which were having crazy low sale prices… but that’s for another post.

Tinker’s Hollow, designed by Mayah Parx, was like a fun stroll through whimsy-land! There were toys and watch towers and crooked houses that made me think of the Weasley’s Burrough. There were unicorns and faeries and a giant xylophone, a big wooden airship, and lovely giant bird pairs cuddling and glowy trees and mushrooms, oh my! I really enjoyed wandering around this sim.

Ok for the next 2 photos I have to disclose that the Serenity sim was not in fact this dark, I was just playing with my Windlight settings and liked the way this looked. Serenity, designed by Kaelis Ember, was actually well lit, a pretty city built in a u-shape around a waterfall and body of sparkling blue water filled with lovely lotus blossoms. The stores had a soulful feel, a blend of Elven and Cathedral architecture in their builds.

Next up is Lucentia, designed by Marcus Inkpen and Sharni Azalee, a seaside town with a very large, very beautiful, and very mysterious structure in the water that holds a giant, glowing crystal in its center. What is that crystal for? Is it a source of mystical energy? A portal? Just a pretty piece of bling one should perhaps not stare at for too long? I’ll never know…but it suuuuure was pretty!

Lastly, here are some pics taken at Sapphire Mirror Lake, the Arts and Entertainment sim designed by Haveit Neox, and filled with his signature awesome sculptures. This is where the giant stage was, where we got to see Sam Puren as the Emperor in the Night Theater’s production of Fairy Tales (which was soooooooo good!!!), where the light and sound artists presented their shows, and more shows that I missed but wanted to see oh so badly.

Sadly, I have no great photos from Twilight Illusion, Bright Haven, or Malfience, though I really, really wanted to get pics of all the sims. I just simply ran out of time! There was SO much to do at the Faire, and so many sights to see, and so many things to find on the quest, and so many stores to shop and bargains to be had! AAAAUUUGHHH! And now we must wait a whole year for the next fabulous, fantastic SL Fantasy Faire!

Please by all means feel free to leave a comment with links to your fantastic Fantasy Faire blog posts, Flickr photos, videos – whatever you have to share with the world. I love to see your stuff! 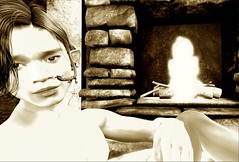