Hello virtual Goddesses and Gods! Last night I went in world totally intending to take some pics of some fabulous new stuff I got at a super bargain price, to use in my first ever “bargain hunter” post. But a fun thing happened on the way to being productive…so now I present instead, my first ever “my virtual life” post!

So, yeah, once I logged in, I just didn’t feel like doing anything productive, and I had the bug to explore. Exploring and taking photos <— those are my two favorite things to do in SL. I had about a bazillion unread notices and one of them was about a Lunar Landing anniversary celebration, a totally fun event that had happened while I was away in the real world. Poop! But that was ok, because though I missed the event, the sim was still there, so off I went. As always, to see the photos at larger sizes, clicking them will take you to the photo in my Flickr stream.

The Moon Faery came up to the surface to see what was going on. What was this strange creature dressed all in glaring white? Why had he erected a house on her turf? Was he planning to stay? Why did he insist on carrying that big boxy thing on his back? 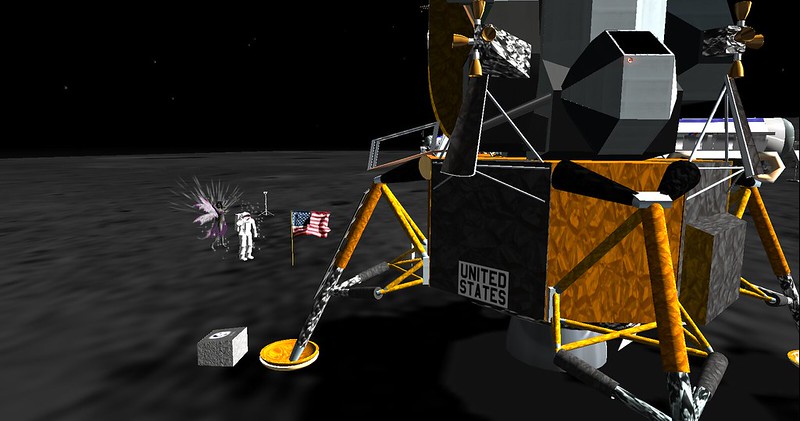 The little decorative flag he planted was pretty and colorful, but she didn’t care much for the style of his house, it didn’t look very comfy. And for crying out loud why did he stay up here on the barren above when all the good stuff was below the surface in the caves, where the waterfalls fed all the beautiful plants and animals, and the faeries danced in the earthlight that streamed through the crater crevices to light their little paradise? Silly humans. She would never understand them.

The earth girl held the glowing power supply carefully as her compadre dismantled the lunar experimentation gadget and fixed the whatchamacallit. She had to be careful not to stare into the core of the power supply orb, for it was rumored that it had the power to send any who gazed at it for too long into space madness, never to return. And she knew what happened to those who contracted space madness: they pushed the big red button, and were never seen again. 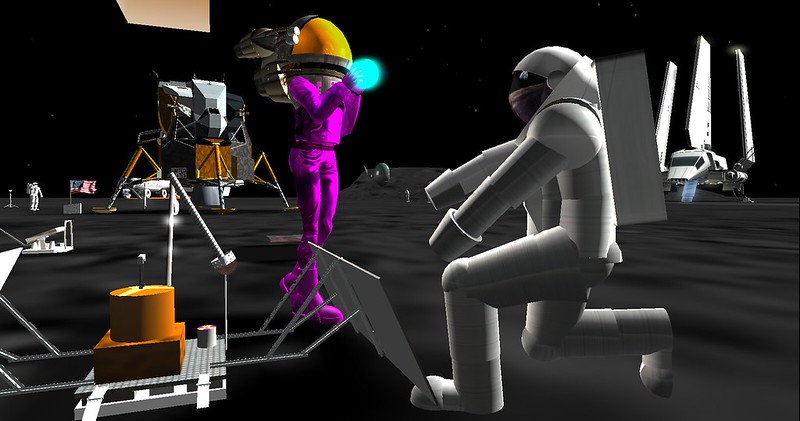 While most of her brain concentrated on preventing space madness, a small part ruminated on the question that never quite left her… why was her helmet so damn big compared to everyone else’s? Why exactly did her helmet require mini jet engines be attached to it when noone else’s did? Was it because her hair was so fabulously thick and curly, and the others were mostly balding men? She made a mental note to ask the engineers when their mission was over.

After the Whatchamacallit Fixing Mission was Over…

The space traveler decided to take some R & R on a planet she heard about at the spiral galaxy bar a few solar systems over. This planet was rumored to be a paradise, populated with the beautiful creatures that filled the old Earth fairytales: Dragons, Elves and Faeries. The Terrans had even named the planet “Elven Forest.” Such creatures were pure fantasy, of course… unless… unless maybe they were based on tales told by visitors from distant worlds such as Elven Forest!

She hopped in her space jet and flew off to the planet. There she was stunned by the gorgeous forests and flora that covered so much of the planet. She found a place to land, and wandered into a gorgeous meadow filled with oranges and yellows. She wished the planet had breathable atmosphere, wondering what the flowers here smelled like. 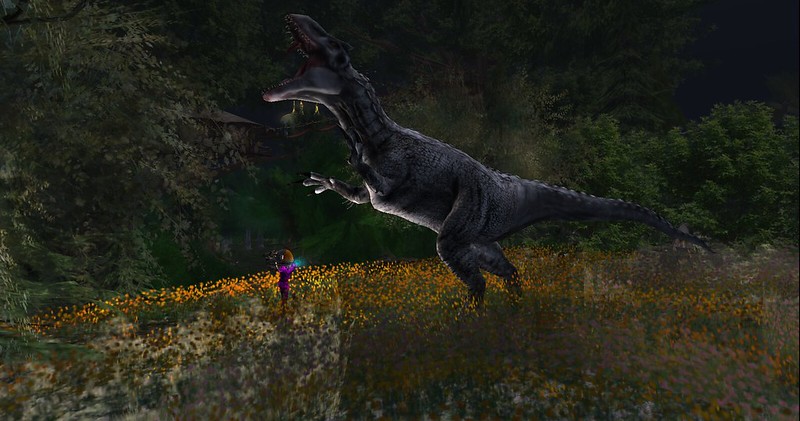 As soon as that thought crossed her mind, he appeared and rawred – the Untamable King! Wouldn’tcha know it, just as she thought she found a paradise-like world, hoping to see the faeries and elves and dragons rumored to live here. If by “dragon” they meant “scary effin dinosaurus teethus rex” then she had hit the jackpot. At this point she could only hope that the beast might like to chase her shiny ball instead of her self. That is, if she could unfreeze long enough to throw said shiny ball. Alas, her final thought was “oh well, beautiful elf and faery world, it was nice seeing you for a few minutes before I die.”

Beauty and the Beast

If only the space traveler had managed to live a few minutes longer. The beast’s terrible “RAWR” attracted the attention of one of the Faeries that the space traveler had so desperately wanted to see. The Faery was armed with a sword. It didn’t seem like much of a weapon, when facing the Untamable King. The beast came at her again and again, snapping its great jaws at her wings, looking for another tasty morsel. But the faery was fast…magically fast, and her sword, though small compared to the great beast, was sharp and on target.  Each time the beast lunged at her, it found only a sharp blade edge plunged into his flesh. The wounds inflicted by her sword were small compare to the battle scars he had from skirmishes with others of his kind, but they were effective. 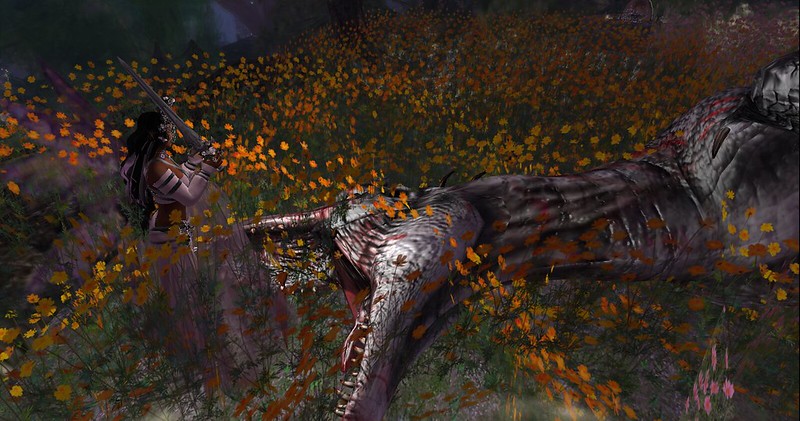 The battle lasted long, but in the end his blood loss from all those tiny wounds was too great. He had overexerted himself, unbelieving that a creature so small and delicate could possibly be any threat to him, and that overconfidence was his undoing.

She had vanquished the Untamable King, yet she took no pleasure from the deed. He was truly a *magnificent* beast: strong, beautiful, fearless. But he was eating her friends and family, and had to be stopped, or her kind would soon disappear for good.

She knelt over his lifeless body and gave thanks to the Goddess for her victory, and that his death was relatively quick and clean (when compared to fighting with another of its kind and being torn apart by tooth and talon). She said a blessing for his soul’s journey to the afterlife, and gave thanks for the bounty of nourishing flesh that would be salted and dried and stored in the root cellars, to carry the neighboring Elven village through the next harsh winter. The beast would feed many families through the season.

Many thanks to Nameless.exe (VioletBogues) (aka the dino beast!) for the fun and pics! That awesome “Untamable King” dino avvie is available if you successfully beat the challenge that’s going on at Prehistorica: The Dawn Kingdoms. Prehistorica is another one of my favorite realms.

Dinos everywhere, and great dino avvies for sale in the store. The Untamable King is one of the new release avvies available for purchase, but only if you successfully beat the challenge. There are several stages to the challenge and there will be additional dino avvies made available to those who complete the challenges. Kudos to the awesome Wanders Nowhere, creator of Prehistorica and the avvies, for his awesome craftsmanship, and the awesome realm that he created, born from his love of dinosaurs. Wanders rocks!

Elven Forest is another fave, and the place to be if you’re aiming to see the wondrous creatures that live in a world of fantasy:  Elves, Faeries, Dragons, Drow, Animorphs, Pixies, Mers, and even a Skeech.

It’s a great place to dance around the mushroom and be social, or to find romance with your loved one in one of the many cuddle spots found throughout the Forest.

One thought on “One Night in SL: From Space Adventurer to Dinosaur Slayer”