The faery stood in the water, frazzled, weary, worn and torn by the daunting trials she had faced in the last two days. They had taken their toll on her mind, body and spirit, and they had taken her from where she most wanted to be. She wondered what had she done to draw the ire of the Elementals who so graciously smiled upon her. She stood in the cooling, calming waters of the Sea, and then let herself float, mind, body and spirit.

That’s when it came to her. She recalled it now. The Sea had called to her daughter, the faery, as she reclined on the shore. “Come to me my daughter, immerse yourself in my cleansing waters, let them caress you and hold you as you swim.” But the faery had declined, saying “Thank you for this gift, but I am already being held and caressed, and I do not wish this magic to end just yet.” And with that she had turned her back on the Sea, and returned her attentions to the Magician who so enthralled her with his great magic and charms.

But now the Goddess who loved to be faery knew what she had to do. It was time to make amends to the Elementals who had created her and given her this gift of life. It had been too long, and they needed to hear from their daughter. It was time to show them her gratitude, and to dance for them with joy in her heart.

The faery submerged and changed form, she was a daughter of the Sea Goddess. 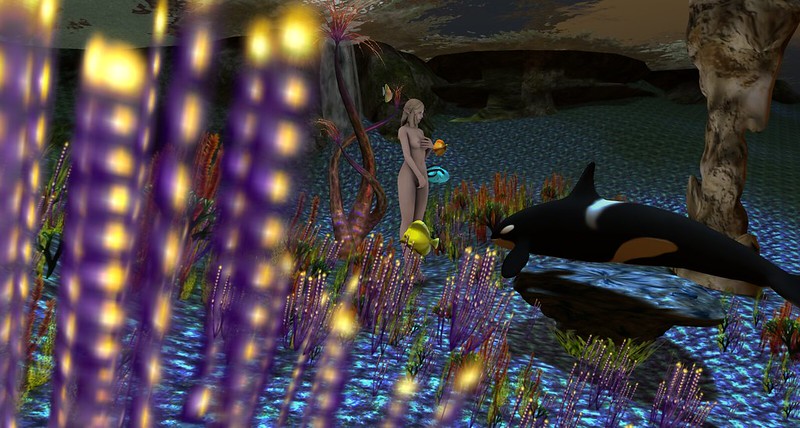 She swam to the Water Elemental and paid her respects, offering thanks and laying treasures at Her feet – a pearl, round and perfect, a few tasty strands of ripe, tender seaweed, a pretty piece of driftwood that came from the islands nearby. And then she danced for the Goddess, twisting and turning, speeding through the currents, letting them caress her smooth sea beast skin, rolling her flippers and swishing her tail. She leapt gracefully from the water, lost in her dance, joyful and sleek.

She swam with the fish, chased the seabirds who floated on the surface, and splashed some humans she found in a canoe. And all the while she gave thanks to the Sea Goddess, until the Goddess smiled again.

Next the faery went to the Fire Elemental, bearing an offering of dried flowers and herbs, and a song to be played on her pipes. 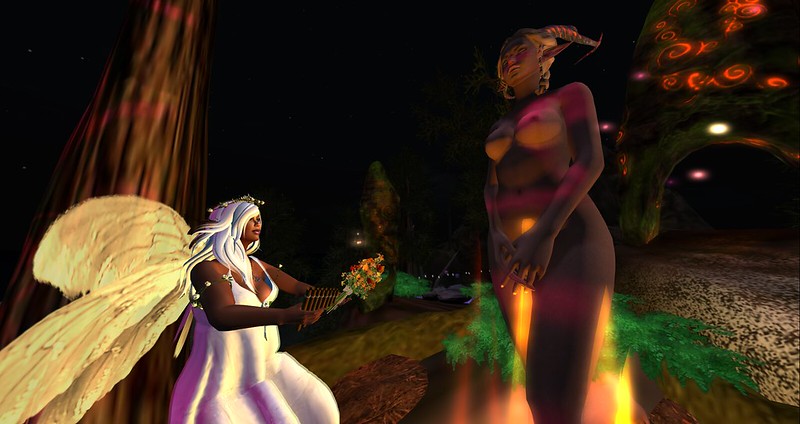 When these flowers and herbs were tossed into the flames that licked the Goddess’s feet, they would release their essences and fill the air with aromas to please Her. The faery tossed them onto the flames and watched as they sent colorful embers dancing up to the sky. She played the pipe song, a sweet melody full of promise and magic, one which evoked images of cascading lights and flowers, of a whirling, swirling vortex of planets and stars and fiery suns, and at the center of it all, two figures dancing for the gods. 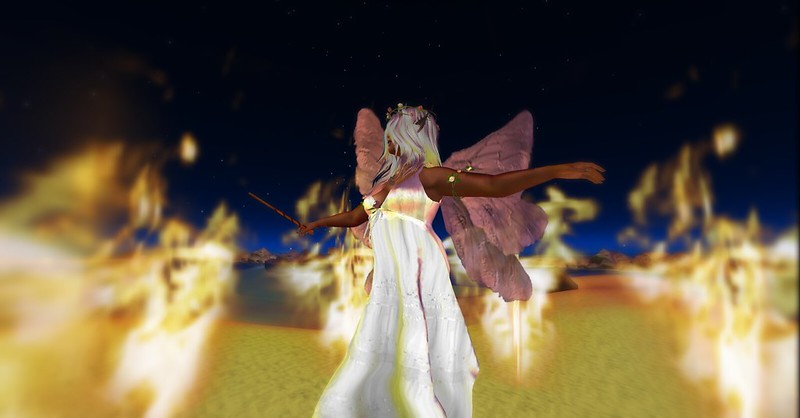 After the dreamsong was over, the faery conjured with her magic a magnificent ring of flames, so that the Fire Goddess would see her dance. The flames cast their yellow and orange lights on her white dress, they turned her wings pink and red with their heat. But they did not burn the faery, for she was a daughter of the Fire Goddess, and her dance was a ballet of flame and gratitude. When the flames died down at last, the faery looked back at the Fire Goddess and saw a smile upon her lips.

Next she found the Air Elemental at the top of the highest mountain peak in the land. 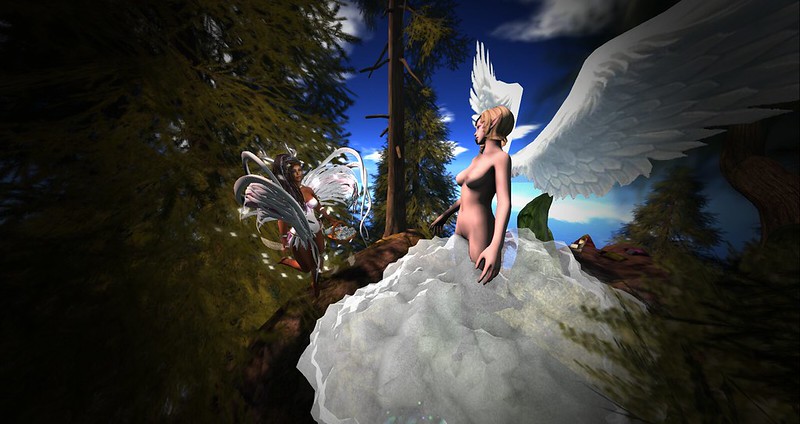 To Her she brought gifts all white, the color favored by this Goddess of the air. In the faery’s left hand she held a basket of white roses, whose petals she released to be carried away by the winds, and in her right hand she held a found feather which she had magicked to bring forth pure white feathers to float in the air around them. The faery had adorned herself in her most beautiful white wings for the dance she would do for this Goddess. 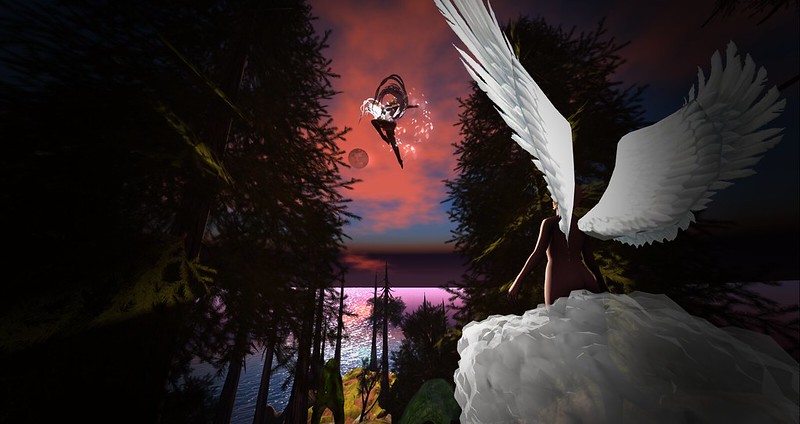 The Goddess watched as the faery flew high between the tallest treetops and began her dance, white feathers falling around her. She flew in graceful twists and turns, she rolled and tumbled in the currents that carried her aloft. Her dance embodied the joy and majesty of the winged creatures that flew on the winds, and of rainbows and clouds, dewdrops from the water Goddess that clung to the hair of the air Goddess creating beautiful prisms of light until they grew so fat and heavy they fell from the sky. When she was done, she came to rest on the mountaintop, and saw that the Air Goddess smiled upon her again. It was time for her journey to continue.

The faery found the Earth Elemental rooted to a cliff by the sea, the redwoods and pines behind her keeping the soil secure with their roots while the earth Goddess gazed out at her sisters, the sea and air. For this Goddess, the faery took the form of dryad, her legs turned into sturdy, hardwood trunks, her forearms and hands became branches, the rest of her skin was covered in thin bark that was soft and smooth and slightly fuzzy, like that of a young Sycamore tree that has not had its first peel.

To this Goddess the fairy offered a gift of a wooden staff made from the finest mahogany harvested from a fallen tree branch, topped with a glowing crystal found in a cave deep in one of the great Mother’s caverns. The crystal glowed with the energy of the earth, and had the power to bring forth new shoots of plant life in barren grounds. 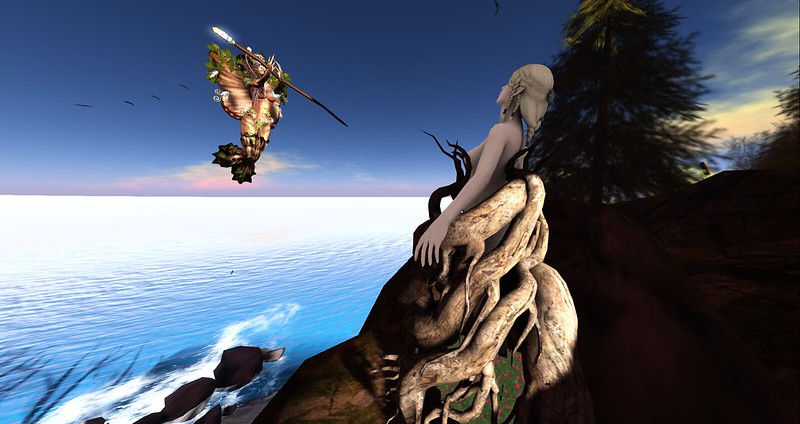 After presenting the Elemental with this gift, the faery landed on the plateau below, and began to dance for Her. This dance was very different than the others she had done, which were energetic, fiery, passionate and full of motion like the Water, Air and Fire Elementals she had danced for. But this Elemental was of the Earth, ancient, wise, patient, grounded, and though she did not move much above ground, she spread her roots throughout the world, touching all living things that lived upon or in her soils. The faery’s dance kept her trunk-feet rooted in place while her legs, hips, and shoulders moved in slow, sensual, swaying motions.

Her arms and head followed in the wake of these motions, they were branches swaying gently in the breeze while her eyes roamed the shadows of the trees looking for the dappled light that made it through the leaves to the ground. Mystic fireflies joined her in the dance, lending her their colorful lights while she reveled in the roots of the earth and trees. She was lost in a trance, she was one with all the life that comes from the soil, she felt all the tremors of the ground. When she awoke from her trance and looked up, the Earth Goddess was smiling upon her again.

She had pleased the Elementals with her gratitude, her gifts, and her dances. She hoped that the Elementals would smile upon her again and grant that which she most wished for: time – the time to experience the Magic that she knew was waiting for her.

She thought that they would. After all, she was their Daughter, created to wander the realms in joy, with laughter, love and a sense of endless wonder.

Thank you for being my Muse  😘🤗

As always, my beautiful virtual gods and goddesses, click any of the pics to see them in glorious larger sizes on Flickr.