Hello my lovely virtual goddesses and gods!  Here is part 2 of the story inspired by my wanderings around this year’s recently ended SL SciFi Con.  If you haven’t read part 1 yet, you can do so here:  From Space to Soil – It’s Good to Be Home. Oh, you’re back? Great! Welcome back – I hope you enjoy the rest of the story 🙂

From Space to Soil: It’s Good to Be Home, part 2

…  She had come across a holodeck on the space port, and though she was tempted, she resisted the urge to go in. Better to spend her time in the park modules, where the water and rocks and leaves and flowers were real.

However, she’d heard there was a great live performance show today in the Milky Way Cabaret and decided to go. It was highly recommended by her crew mates, was receiving rave reviews, and it sounded like a fun way to spend her last day in the bustling commerce sector.

In fact, one of her favorite crew mates and friends, Sam Puren, was performing in the show this evening, and he’d given her a ticket for one of the best seats in the house. She really couldn’t refuse that now, could she?

Sam showed the faery to her seat and they chatted for a bit before the show began. It was really nice to play catch up; she usually only ran into him when their missions took them to planets that were hosting big galactic Faires.

Sam left to go backstage when the sold out show began. The curtains were drawn, the lights went down, the stage was set…and the Milky Way Cabaret lived up to all its excellent reviews! It was a grand spectacle of lights, sights, music and dance! The quick changes of both costumes and sets had the audience aaaaaahing and ooooohing and wondering “how did they do that?!” throughout the show.

The show featured performers of many kinds and species, from humans to androids to very alien looking creatures, which was really amusing when they dressed in boudoir outfits designed for human bodies.

All too soon the show ended and it was time to head back to the hotel to rest up for the next day’s journey home.

The faery was grinning at these thoughts and memories when the passenger shuttle pilot announced they were approaching their destination. Now she had another reason to smile – she would soon be home! She headed to the dock where a cargo ship was waiting for her. The ship was spartan and small, and she was glad the Federation had already shipped her 6 months worth of luggage home, even if it was quite a small amount compared to what she’d seen the humans bring along. All she needed for the 3 day trip from here was a few essential toiletries (for faeries this was usually a spritzer of water infused with floral essences, and packets of aromatic herbs, bark strips and moss to remind them of home), her jammies, and some sandwiches and sweet snacks made from the exotic fruits that grew on the planets they visited. Only non-sentient fruits, of course, honored gifts from the planets’ natives. 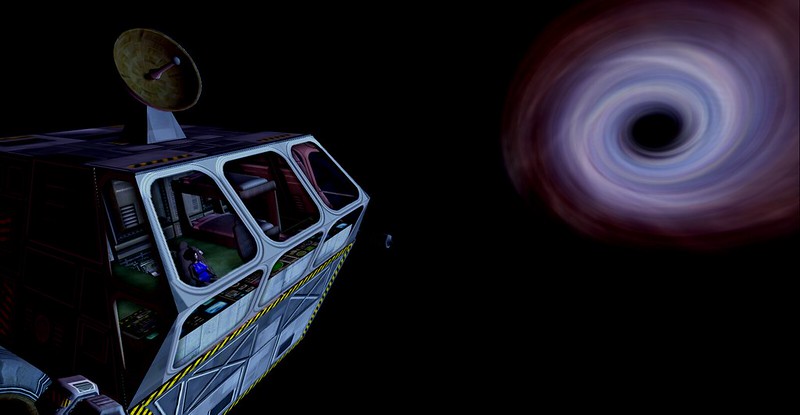 The trip from here was mostly uneventful, though she always marveled at the wondrous beauty of deep space. The most exciting part of the trip was going through the wormhole portal that would take the ship to her native galaxy, a pretty spiral of stars and worlds known to its locals as the Milky Way.

Finally, oh finally, the ship approached her home planet! Spartan and small may not appeal to many, but to her it was perfect when it meant it was the kind of ship that could enter the atmosphere and take her close enough to her island paradise (aka “home”) that she could simply leap off the ship and fly down to the ground. 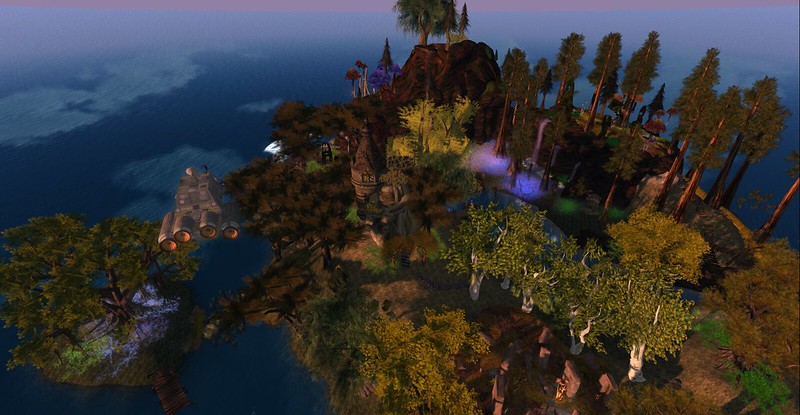 Oh it was so good to be home! Immediately she headed to the waterfalls and immersed herself, washing the long journey off. Her skin began to sparkle and shine, and changed color from the dark charcoal gray of space to a pale white with incandescent splashes of pink and blue, like the colors you see on a dragonfly’s wings glistening in the sunshine. She traded her oh-so-functional and practical Federation blue crew dress in for oh-so-soft-and-silky-and-pink flowers and silks that served no function but to make her feel pretty. And then, oh then, she wiggled her toes in the sacred soil, she communed with the Great Mother, she stood amidst the trees and flowers and basked in the sunshine and shadows! 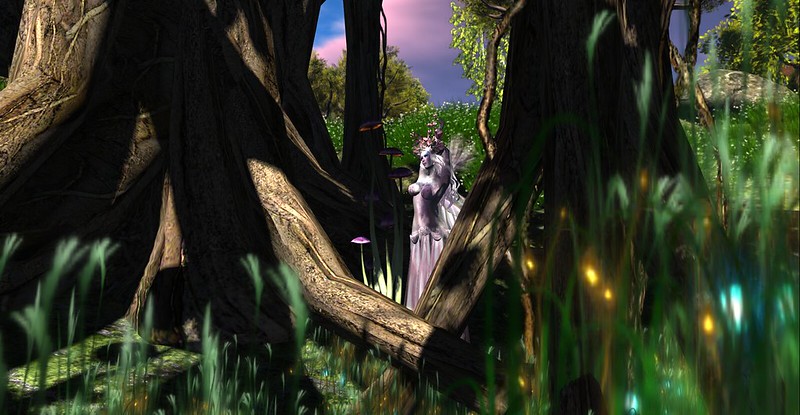 She was home, she was happy, and she was ready to explore her own world once again. 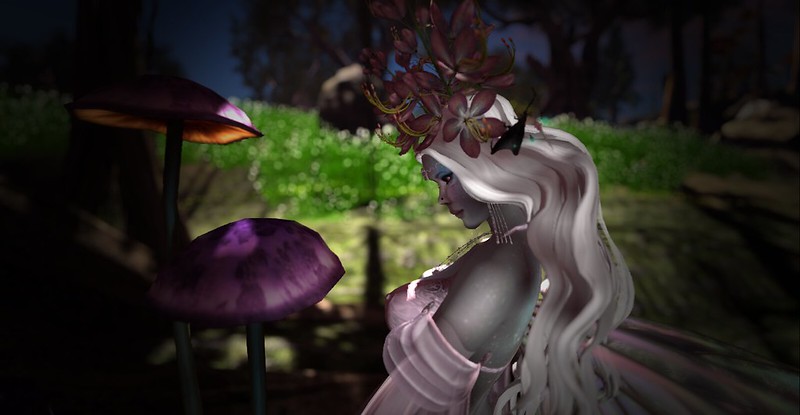 That’s it for today my lovely virtual goddesses and gods! To be honest, this isn’t my fave story, mostly because it’s so much longer than the others, and I have become enamored with the short and sweet. But darn it all, there was so much going on at the 2016 SL SciFi Con, which was the muse for this one, that it just couldn’t be helped.

I have to say Thank You!!! to the wonderful Mr. Paystreak, who helped me find the perfect ship for this photo story. Mr. Paystreak is the Lord High Commander himself of the equally wonderful SL Exploration Society, a gaggle of explorers and noob mentors who collectively own what’s rumored to be the largest airship fleet in all of Second Life! How cool is that! I knew he would be the perfect person to ask for help in finding the right ship for my photo shoot needs and he very kindly provided it.

One thought on “From Space to Soil: It’s Good to Be Home, part 2”