Hello my lovely virtual Goddesses and Gods. Warning: this post is long and emotional. If you are fine with that, go on, and if not, now is your chance to leave the page.

Two days ago I found the smallest member of my tribe, a pretty little leopard gecko lizard, belly-up dead in her habitat. No, she wasn’t a furry, cuddly, warm and fuzzy creature like my cats and dogs. She never sat in my lap, she wasn’t fond of being handled. Mostly she just hung out in her little mossy cave and came out to eat worms and then went back to her little mossy cave. She was a nocturnal creature, so I didn’t even really see her a whole heck of a lot. But she was with us, in her own lizardy way, for 12 years and I still feel sad at her passing.

I also feel sad about her whole life – she was always in that darn glass cage, she never got to run, really run like the lizards outside. Of course, she was never chased by predators like those lizards outside either. But I’m not so sure it was a great trade-off. She was actually my (at the time) spouse’s pet. I am not fond of having to cage an animal, and I always felt sorry for her. I’m sure it’s great in some houses where the animal can come out of their cage to roam around for a while with their human companions, then go back to their cage, in which case it is their den and comfy home. But in my household a loose lizard would become a cat or dog snack in short time.

But I digress… so I found her dead in her habitat (cage) belly up. Finally the moment came when I had to pick her up. When you see a death happen, your mind can play tricks on you. Well, my mind anyway. This happened when my darling kitty child died too. I looked and looked, and thought, is she really gone? Is she really dead? What if she’s not really dead, and will somehow miraculously recover from whatever is paralyzing her in a few hours? Is there any light left in her eyes?

So I put her back in her little mossy cave for the day, just in case. And so if she was still alive, she would be in a comfy spot, maybe ease her suffering. But by the end of the day it was apparent, she was indeed gone. I couldn’t deal with it anymore that day, so I slept on it, to decide what to do with her in the morning.

I got in touch with her daddy, who was out of town, and told him, and that was awful too. He will be back this weekend, and we will have a nice farewell ceremony and burial for her. In the meantime, I had to do something with her body, before she started to smell and decay, to preserve her until he can get here.  I had to wrap my poor little lizard’s body in paper towels, then put her into 2 plastic bags, and put her into the freezer.  UGH and EW. That was SO difficult and uncomfy a thing to do!  Her whole life, her presence was small but it was beautiful. She was really pretty, all yellow with black spots and stripes, and watching her had a calming effect, even if you couldn’t cuddle with her.  And then I had to wrap her in paper towels and put her into the freezer, like some lump of flesh, like a carnivore would do, who has no connection at all to the life that once belonged to the flesh they first keep in their fridges and then cook and consume. Ew 😦   I know it’s just temporary, and this weekend we will have a ceremony that honors her nicely, but I still feel guilty anyway.

Expressing and Escaping in Second Life

Well gosh I hadn’t meant this post to be this long and cathartic. I had originally intended it to be about how Second Life can be both a place to express our feelings and a beautiful escape from them.

The day I found my lizard belly up, for example. That night I went into SL and immediately changed the look of my avvie. She had been done up as a warrior goddess for some photos I had been shooting the previous day. The warrior goddess was put back into the closet, and the goddess in mourning came out. Dark skin, lovely black dress, a fave hairstyle that is pulled back from the face, so as not to hide her expression. An expression AO which gave her  a sad look, and animated tears occasionally rolling softly down her face. Oh and perfect, I found a “mask” made of some really neat animated lighting strikes behind the eyes. Copied and repositioned one and a lightning strike periodically impaled my heart. Perfect.

I started out chatting with a friend or two, but those convos were short. I wasn’t in the mood for chatting. I finished putting my goddess in mourning look together, then sat and watched her cry, and in RL I cried right along with her. She was the virtual, visual expression of my sadness.

I felt restless, but didn’t want to go to my usual place to be social (Elven Forest) or head off to the SL13B builds to take more pics, which had been my original plan. I didn’t want to be around anyone else and I didn’t want to just sit in my home and cry either. So I headed off to wander around my wonderful home sim, Fires of Mischief. Doing so made me even more grateful to call this sim home. It is truly a beautiful, magical place where one can find tranquility, peace and healing. The music selection is soothing and uplifting and spiritual. Sim owner and landscaper Redd Wolf envisioned a place where all would be welcome, and where all would find peace and tranquility and joy, and I can truly say he achieved his goal. (Thank you, Redd 💗)  Visit Fires of Mischief here.

On the sky islands I found some mystic Unicorns. They have built in poses, and this turned out to be the perfect place to feel my feelings. I was not alone, with these Unicorns, but I was also not with actual real people with whom I would have to carry on a conversation that I wasn’t in the mood for.  These magical, mystic Unicorns were the perfect companions for the evening. 🦄

Taking these photos was therapeutic. Sharing them socially on Flickr was my way to be social, without really being “in person having to talk” social. I’ve found that when I am grieving or depressed, I want SL to be just an escape. Not a social outlet, not a game, not a place to connect with other people, as SL can be all of these things (and don’t get me started on the “it’s a game” – “it’s not a game” war, that’s a future post topic. Why can’t it be both?), but just an “I wanna go somewhere where there’s no problems, my fantasy escape world” place to be. I’ve also found it therapeutic to be an animal during these times.

Shedding the human form of my virtual self is like a ritual shedding of my human problems and challenges, and the emotions that come with them.  For a little while, I am transformed. I can skulk around as a cat, or flutter among the flowers as a butterfly, swim in clear waters as a whale, playing with the fishes and enjoying the colorful coral and sea greens, or even go stomping across the grounds as a dino-beast. For a while, I can forget all my pains and problems.

Second Life is many things to me, but one of the most important things it has on occasion been is a place to mourn, and to find solace, and the most important thing it is and will always be is an escape. I first discovered Second Life years ago when my mother had cancer, and I was spending a lot of time with her, helping care for her. Which meant I was watching her decline, and eventually, die. It was during this time of caretaking and immense grief that I discovered Second Life, and it was my escape, my world where there was magic and beauty and wonder, and no aging, disease, death.  Even when I met folks who were suffering from something awful in RL, here in SL they were still gods and goddesses, vibrant, beautiful, and able to express what was inside them, despite what their outside was going through in RL.

I can’t think of any better name for such a magical place than Second Life.

“Transformation” is one of The Daily Post‘s daily prompts. Visit the prompt page to read more prompted posts. Also check out their Blogging University. It rocks.

4 thoughts on “Mourning and Solace in Second Life” 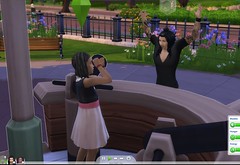 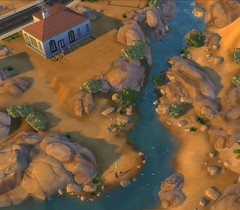 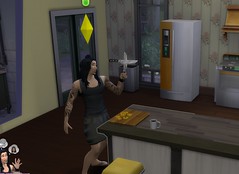