Fires of Mischief: Birth of a Sim, Part 2

And Photo Contest Too!

Hello my beautiful virtual Goddesses and Gods!  Well it’s about time I put a new post up. I have a few topics in my queue, but you know how it is… holidays, vacation, actually enjoying not having to do anything… it’s *tough* going back to being responsible again!

But I digress – now to the topic at hand. Back in August, I posted Fires of Mischief: Birth of a Sim (part 1). That post documented the very beginnings of Fires of Mischief, including this photo of the nearly naked sim, when it was just a piece of land in the ocean:

Since then, sim owner and landscaper Redd Wolf has been bringing his vision to life, creating a natural haven of mountains, waterfalls, trees, flowers and undersea beauty where all may find peace and tranquility. You won’t find any electronics or futuristic gadgets – here you’ll dance in a faery circle or crumbling, ancient pavilion, not on a floor of flashing lights. There are no modern buildings, but you’ll find a stone wizard’s tower and hidden caves for chatting, cuddling or romancing. 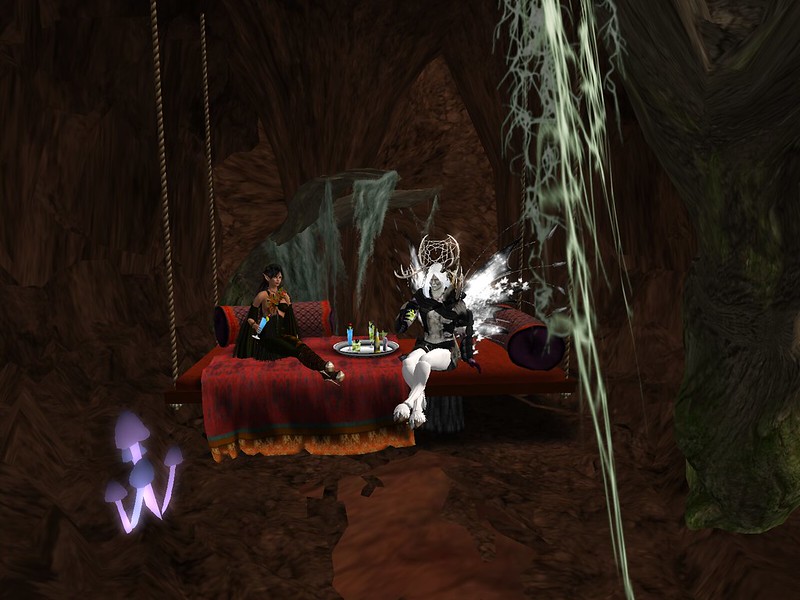 For me it’s been a real pleasure and privilege to have witnessed this sim’s growth and coming to life in stages. What makes it even more special is that this was not a contracted job, but rather an act of passion. Redd isn’t so concerned with getting lots of visitors – he just wants it to be a place of sanctuary for those that do come to visit. He isn’t interested in making it a nightlife hotspot – he wants to provide a place of tranquility and peace. He isn’t concerned with trying to create income from renters or stores or donations (though donations are always appreciated, of course) – nope, Redd is paying the monthly fees because it is a fantastic outlet for his creativity. He’s a guy who lives on a mountain and loves nature and fantasy, and Second Life® is a perfect canvas for his artistic endeavors, in which he can blend those loves of nature and fantasy. He isn’t trying to attract hard core role players, though the sim is a fine place for role play both above ground and underwater, and RPers are welcome – but so is everyone else.

Fires of Mischief is that awesome place you can go unwind with a glass of wine after a long day at work, seek beauty, wander or fly around as an elf, or satyr or dragon or gryffin or faery or even human – whatever you feel like being – enjoy a dance or a cuddle with a partner, or just chill and enjoy the sunset. And, of course, take lots of photos!  Speaking of photos…

To celebrate the opening of the sim on New Year’s Day 2016, Fires of Mischief is hosting a Grand Opening Photo Contest with some great prizes!  Contest runs from Jan. 1 – 21, 2016.

So be sure you visit Fires of Mischief – contest details are in a sign at the landing area. Submit your contest photos to the Fires of Mischief Flickr photo group with “FOM Grand Opening Contest Entry” in the title. Winners will be announced on Flickr and there will also be a blog post here on Goddess Whispers.

“Corals of the Deep” – a beautiful underwater shot by Fae Willow:

This lovely and colorful entry is by Morgan Whitfield-Mickalobe:

It’s so fun to see Fires of Mischief through other people’s eyes. So please do me a favor, will you?  Go to Fires of Mischief, see what calls to you there, take a few photos and share them with us by entering the contest. I can’t wait to see what you find!

Feel free to leave a link to your contest entry photo in the comments below too!